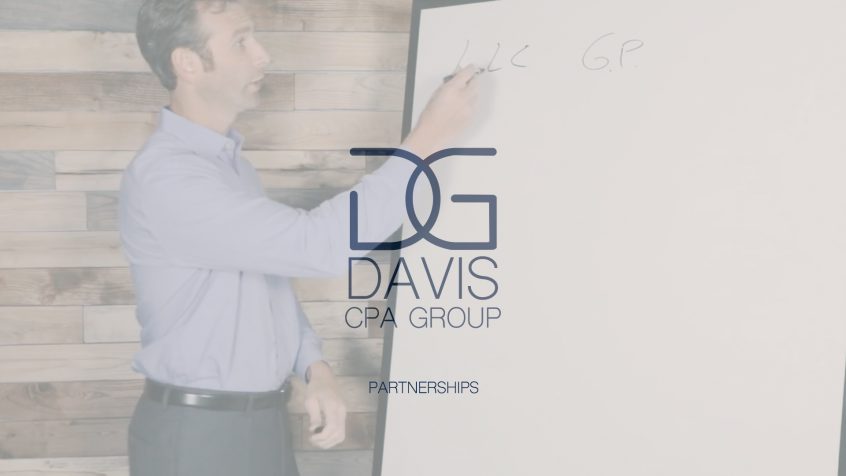 Hi again, Brandon Davis with David CPA Group, here to talk to you today about partnerships. A continuation to discussions of choice of entity. You’ll see some links below to the previous videos that we’ve done in regards to other choices and other entity types. But today we’re going to focus on the partnership entity. Partnerships are a great vehicle for owners that want to come together and start a business, but want to have some flexibility in how they allocate things.

So, that’s one type of structure. Another type of structure is called a general partnership. I’m going to call it a GP for now. General partnerships are when multiple owners, and those could be individuals, they could be other businesses, come together, form an agreement. Often times under what’s called an operating agreement and become partners in whatever venture they’re trying to establish from a business standpoint.

So, say for example, there’s a real estate development, or a one off project, the two companies want to come together and work together and partner on. A joint venture structure would be what they would use for that. I’m going to focus primarily though, today on LLCs and general partnerships, and what the differences are between those two.

Well, one of the things we need to look at or talk about a little bit further, and particularly as we want to erase this here, as we look at LLCs and general partnerships is a couple of legal aspects. An LLC is limited liability company by design, hence the name LLC, Limited Liability Company. General partnerships though are a little bit different. General partnerships do not offer the owners any liability protections at all. So, one of the things that I often tell my clients, particularly if they have been in a partnership for a long period of time, they may want to reevaluate that structure if they’re operating is what’s called a general partnership. And they may want to actually change to a limited liability structure to limit the liability exposure they have in operating their business.

What I mean by that is anytime we operate a business, or we own real estate, or do something, we have the potential liability of our actions inside those activities. For example, if we own real estate, and someone gets hurt, falls down, they sue the partnership entity, they could also sue the owners. On a general partnership structure, by suing the partnership entity, the owners are going to be liable also. I know I’m espousing a little bit legal device. So, you want to certainly, consult your attorneys, but that’s one thing that is certainly an issue with general partnerships, is that that liability issue for claims that arise against the partnership itself.

So, that’s one thing I always advise my clients on. Now, when it comes to a taxing structure, partnerships are a lot different than our LLC taxes S corporations and our S corporations just in general. In the past, you recall that, and like I mentioned, a partnership is what’s called a flow through entity. I’ll write it up in here, called a flow through entity. Meaning that it doesn’t pay its own tax like I alluded to you before. Instead, the income comes after the partners who each get a Schedule K-1.

So, we file a Form 1065 that reports our income, and our expenses, and we get a net amount that then we share based on our ownership percentages. Well, that allocation of income and expenses is a little bit different or can be different than that of S corporations. The percentages are basically allocated on how the operating agreement dictates the ownership of the company, or the partnership.

An operating agreement is an agreement where you work with generally an attorney to get drafted. And that agreement spells out all the details necessary as far as who has control to do what in the partnership, how income and expenses will be allocated, because you have a lot more flexibility in a partnership structure than you do in S corporation structure, and how you allocate those things.

At the end of year, the operating agreement may say this is going to be a 50-50 partnership. So, 50% of the profits would go to partner one. Again, this is going to be what is called a Schedule K-1, which they use that to file their personal tax return. Liken it to a 1099 that you may get. If you’re familiar with getting a 1099 for having investments or a 1099 for being in business that reports of your share of income that you might have earned doing something, the K-1 is very much the same thing for a partnership tax return, Form 1065.

Well, we allocate this income between the two partners 50-50, and they have to pick up their share of that. Now, one thing is drastically different in partnership structure from S corporation structure, is how this income is taxed. It’s taxed first, based on the income tax rates, but the income that’s shifted to the partners, be it either K-1 is also something called self-employment tax. I’m just going to call that SE tax.

You’ll recall in my previous videos when we were looking at S corporations, that SE tax was something that you could avoid or reduce by having certain structures in place. For example, if you are an LLC, taxes an S corporation, you pay yourself wages. The wages are the payroll taxes, and then the additional income you’re able to take out as a distribution, is not subject to payroll taxes or self-employment taxes. Self-employment taxes are basically synonymous to payroll taxes.

That begs the question, can I have wages paid to me if I own a partnership? The answer is no. Generally speaking, you have no wages coming out to the partner owners and in a partnership structure, and that’s just dictated by the statutes and the IRS rules. So, this income is [inaudible 00:08:04] self-employment tax. Now, one thing that can be done then though to allocate income amongst the partners, let’s say for example we want a situation where partner one has invested more income, more capital, and more cash into the partnership, you guys want to split the profits 50-50, but we want to compensate partner one for more of what he’s put in, or maybe more activity he’s involved in from the standpoint of being day to day operating the business. What we can pay out is what’s called guaranteed payments. I’m just going to say GP, guaranteed payments is what that stands for.

A guaranteed payment is like wages in that if we had profits in the partnership, and we want to push more income to partner one, we could then say we’re going to pay him $10000 or $15000 as a guaranteed payment, that ignores the breakdown of the 50-50 of the net profits. For example, we’d have income here of maybe 100 bucks, we have $25 in regular expenses, and then I’ll do $25 of guaranteed payments that go to partner one, so he’d pick up the extra 25K there. And then there’s $50000 in profits will be split between the two.

So, he had 25000 in guaranteed payment income on his K-1, and then 25000 share of the profits of the partnership as well. It’s an interesting way to add some flexibility to your entity structures when you’re looking at which time of entity to become. One final thing I will say about this, is S corporations that we talked about before, you’re required to have distributions equal to your ownership structures, or pro rata to your ownership.

Well, as that cash is contributed, it increases their capital accounts or their investment in the partnership. So, say partner one here, back at our other example, contributes $50000 in cash. Partner two contributes $10000 in cash. Well, they’re both going to be 50-50 owners. So 50% here and 50% here. We allocate our income based on our capital accounts, even though we’re 50-50 owners and making decisions, and running the day to day business, partner one is going to get more allocated to him based on his capital account until this equalizes over time. Because one thing that happens is that as the distributions of income come out to him, it reduces his capital account. So, over time, they’ll equalize. That’s a nice way to make sure that there’s equitable treatment amongst the partnerships.

I had someone tell me many years ago that partnerships are brutal to work with from the standpoint of complexity, and the tax laws and whatever, but they’re brutally fair. In that, at the end of the day, there’s a lot of equitable things that can be done with partnerships to equalize everybody out as far as what’s been invested, and what hasn’t.

That’s the touch on partnerships. Certainly happy to answer more questions. Please comment below if there’s things that you’d like me to expound upon in regards to this topic or others. Again, thanks for watching.