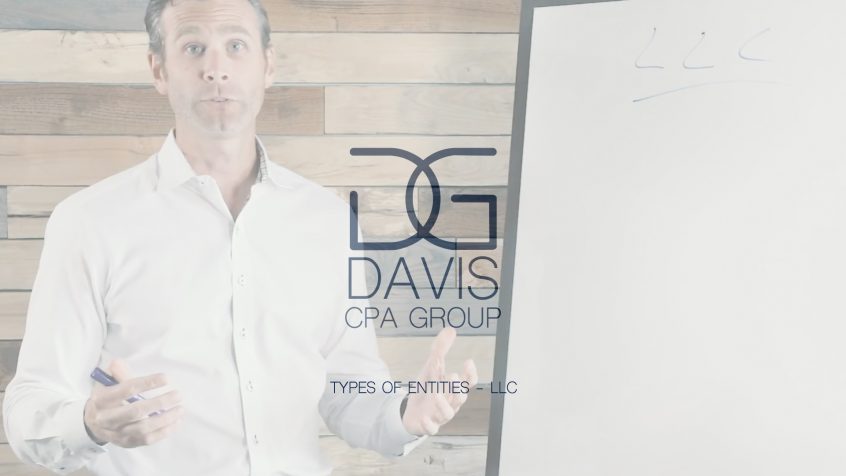 Brandon Davis of Davis CPA Group in Joplin, MO, discusses LLCs in the context of choosing an entity type for a business.

So limited liability company, which is an LLC, is an entity that is created to whenever you’re starting a business, is one of the entity selection options that you have, and it’s used basically to isolate some of the liability you have as being a business owner. A lot of people start of a business, particularly a small business, as a sole proprietorship, meaning that they’re the sole owner.

So when I go in and I do that carpet cleaning business, and I take care of my customers, any positive thing is reflected on me personally and any negative thing that might happen, maybe I ruin someone’s carpet, well that liability would then fall on me also.

So I may call myself Brandon’s Carpet Cleaning, I should’ve used a smaller name huh, LLC, meaning limited liability company. So once I create my entity now, I’ve basically told the world by filing some paperwork with the Secretary of State’s office, which an attorney will help you do that, once I filed that paperwork to create the LLC, I’ve now put a box around the liabilities, and my business is inside this box. And I own the box, I own the LLC. So I’m up here, here’s me, and I own 100% of this box called an LLC.

And you’re going to be thinking, “Well that’s great, what has that done for me?” Well, it’s protected you a little bit, it’s giving you some liability protections. One of things I want to talk about as a CPA, is some of the tax implications of what we’ve just done here.

I talked about before, before I set up the LLC, if I had just Brandon’s Carpet Cleaning Business and I was the sole owner of it, and I was the sole proprietor. Well I’m taxed as a sole proprietor on my personal tax return, which means I’d file a schedule C, which is a schedule were you report all your business and income and expenses, as part of your personal tax return. It’s very simple. It’s straightforward, and it works very well.

The issue there though, is 100% of my net profits on this schedule C are subject to what’s called a self employment taxes. I want to write that down, self employment here, because it’s self employed income.

So I’m going to have self employment taxes, and the self employment tax rate, and I’m just kind of make it easy or simple for us, is 15.3%. So that’s kind of a lot, and that’s in addition to the income taxes that I would be paying on those net earnings also, which again are part of my personal tax return.

So I’ve got to do something about that if I want to make a difference. So one of the things you can do with an LLC, and one of the things that I like about LLC’s, is their flexibility from a tax perspective. I can take that LLC, that was a sole proprietorship when I started, and I can make an election with the IRS, called a subchapter S election or an entity classification election, and change from being taxed as an LLC taxed as a sole proprietorship, to being an LLC taxed as a corporation. And I can take that corporation a step further, and make it what’s called an S corporation.

Well you may be asking, “Well why do I want to do that?” Well, there may be some tax advantages in accomplishing that. Now there’s some caveats that play into it, and I’m simplifying some of the things to get us from point A to point B, to show you some examples here. So there’s definitely some things you want to talk about relative, making sure you have maybe employees or other ways to leverage your earning power in the business.

Well you may be asking, “Well, what’s that going to do for me?” Well what it does, is now I got me out here 100% owner of this LLC, and I got this box. Well this box now is a separate entity for tax purposes. So if I file, it’s called a Form 2553, with the IRS, and we don’t have to get into the details of that, it’s something I can help you with. We file that form with the IRS. We make an election to be treated as an S corporation. So now my box becomes an S corporation, and it’s its own tax return now, it’s called an 1120S.

Well the beauty behind the 1120S now, is I have those same revenues and same expenses that I was reporting on my schedule C as part of my personal tax return. I’m going to take those, I’m going to put them on this 1120S form. Well the 1120S, the S corporation tax return, does not pay its own income taxes. It just files its own tax return.

Well you might be asking, “Well how does it pay taxes in?” Well here’s what happens. At the end of the year, when we file your 1120S tax return, we figure out all your income and all your expenses. So you’ve got your income, we’ve got your expenses, and we have a net figure down here. Well it kicks out another schedule, called a schedule K1. I may be getting a little bit low here, but a schedule K1 that goes back into your personal tax return.

So I’m up here with my 1040 tax return, which is my personal form, and I have my 1120S return that I filed with the IRS, and my K1 that tells me how much to report in income on my personal return, would be the net profits. So you’d have the same net profits basically on the schedule C versus the S corporation, but you may be asking, “Well how am I saving in taxes here?”

Here’s how it works. One catch that you have to have in an S corporation structure, is now that I’m the owner I’ve got to pay myself a wage, and it’s got to be a reasonable wage in the IRS’s eyes, and that’s something we can work through as well if you decide you want to go down that road.

Now again, there’s things we’ve got to look at to make sure the structure’s appropriate, but this is one idea, or one thing, to think about as your business grows and utilizing an LLC and S corp structure to save some taxes.

Happy to talk about that further. Reach out to us. Give us a call, and we can help you make the right decisions.”