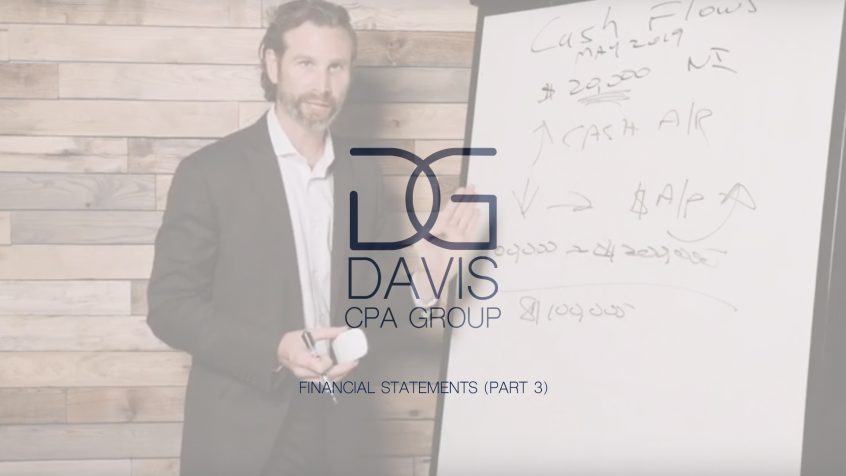 The last statement that I’m going to show you or talk about, I’m probably just going to talk about maybe a little bit more of a higher level because there really is a lot of moving parts in that and that’s the statement of cash flows. The cash flow statement basically starts with your net income number. Say, okay, during the month of May, I made $20,000. So, that’s basically money coming in. Well, if we look at it from the standpoint of being a cash basis tax payer or a tax basis accounting where I report the $100,000 dollars of income once I received the cash, then yeah, this is true cash in 20 grand. Let’s say maybe it’s not, maybe it’s $20,000, but I’ve got, if you go back to that balance sheet we had before, maybe I have some AR out there about 10 grand. So, during this month I’ve built out and made or have 20,000 profit, but I still got some sitting in AR that I haven’t collected yet. Your cash flow statement is going to take a look at things. It’s going to start with your profits in the business, but it’s also to take a look at, let me just clear this off real quick here.

So again, if we look at the cashflow of the business, we had that $20,000 in net income I just showed you on that income statement. So, it starts there, but it takes changes in your, based on the period of time we’re looking at. So, let’s say we’re looking at the month of May, again 2019. It’s going to take the change, which led to this [inaudible 00:01:28] means change. So, we have a change of your asset accounts. Your accounts receivable, your accounts payable and it’s going to look at, okay, have you collected more cash? That’s going to increase your cash. Has your AR grown where people owe you more money? Well, if it grew from the month of April and is higher now, that’s a use of cash, meaning you don’t have that cash yet. Same thing with accounts payable. You pay down a debt or you pay accounts payable, that’s a decrease in your cash and so, a cash flow statement is a really cool tool in that it shows all the increases and decreases in cash, is whether you paid money out, going out the door, it’s going to bring your cash down.

What is the health of your business? And then another thing too, are you financing your cash? Are you borrowing money? So, maybe at the end of April you owed $100,000 to the bank. So, then the end of May you owe $200,000 to the bank. Well, this whole cashflow analysis is going to then show an increase or higher cash of 100 grand, which you borrowed the money and so again, I didn’t put together a whole cash flow statement up here. I think that’s in talking this through here, that may be a whole video by itself, but high level, you’ve got three statements that are very important. You got the balance sheet that’s a snapshot in time, shows you where you’re at cash wise, who owes you money, who you owe money to and what’s left is basically the owner’s investment and then you got the income statement, shows what you’ve made in profit from the standpoint of your net income at the bottom.

It shows how you made it, what expenses did it take to generate that dollar sales at the top and lastly, the cashflow statement, it pulls it all together. Starts with the net income from the income statement, takes the changes in my balance sheets accounts. They’ll really tell you where the cash comes from because this will tie back to the balance sheet ending in cash of 100 grand and it’ll tell me where every single dollar of that cash came from. Very good tool from the standpoint of being able to analyze a business and the financial strength of the business and so, then I’m happy to talk to you about Davis CPA Group.