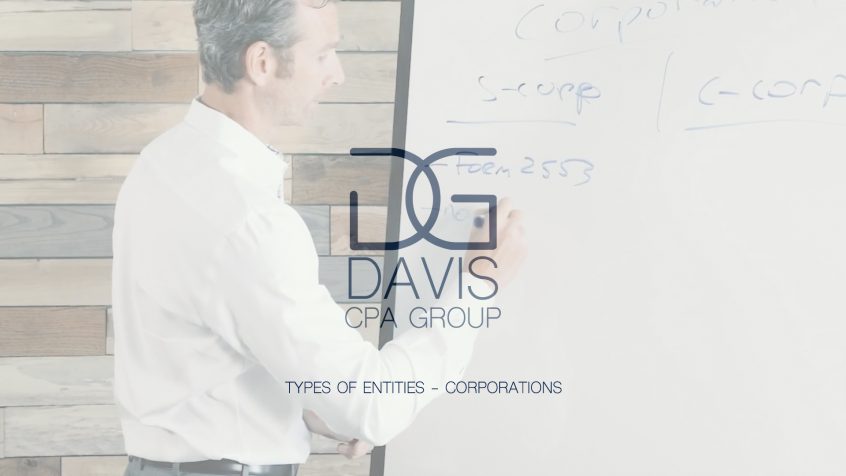 Brandon Davis of Davis CPA Group in Joplin, MO, discusses corporations in the context of choosing an entity type for a new business.

“Hi, Brandon Davis with Davis CPA group. Going to talk to you guys a little bit today about corporations and the taxation to corporations, and S corporations versus, what they call, C corporations, so we’re jumping into it. A corporate structure is one that allows you to have a separate entity, separate from you as the owner. I’ve talked in the past about sole proprietorship and LLCs and what those mean.

Well, corporate structure is one that allows you to have some liability protections inside your organization. It also gives you some formal structures to have multiple shareholders, officers, boards of directors, and all those that they can help you govern the entity, so we’re jump into it here.

So, a corporation, is what we’re talking about today, is any of it that we see a lot of and two options or two question I get a lot of times are what type of corporation should I be? Should I be an S corporation or C corporation and then you ask yourself, “Well, what’s the difference?” Well, we’re going to go into that.

It’s all about how they’re tax. From the standpoint of structure and legal formation, they’re basically the same. An attorney can help you get the bylaws set up, the articles of the corporation with the secretary of state filed, establishing a board of directors, all the legal stuff that you need to make it a corporate and legal entity.

One thing that I like to talk about too, when I’m talking with my clients about using a corporate structure or setting up any type of legal entity is respecting that entity because the whole purpose of setting it up in the first place is making sure you have some level of legal protections. Well, if you set up a corporation and you open up a bank account with this corporation and then you spend all your money you earn inside the corporation on your personal assets and don’t take wages and do formal things to preserve the entity, then you might as well don’t even have it at all and a good attorney is going to say, “Well, you’ve not done a good job in protecting and preserving that entity structure and so if there’s a liability claim that comes against the corporation, you may become personally liable for not doing things properly.”

It’s a little side note in why you want to preserve and respect the entity structure. Well, let’s say you get past that hurdle and you’re going to do that. Now, let’s talk about what structure would make the most sense from a taxing perspective and what are those two options. Again, we’ve got an S corporation structure. S-Corp here and a C-Corp structure.

An S-Corp structure is basically subchapter S of the internal revenue code that talks about corporate structures and this entity structure starts with a corporation tax as a C corporation or it pays its own tax, and you make an election by filling a form 2553 with the IRS to choose to be taxed as an S corporation. That selection or that choice basically means that the corporation does not pay its own tax, so there’s no corporate tax.

Instead, what happens is all of the income and loss from the corporate tax return flows to your personal return. So, personal return or the owner’s return might be a better way to say that. C corporations, they pay tax. They also are set up such that some of the tax advantages or tax rates that you might see and types of income from a standpoint of capital gain, ordinary incomes, some of those things, those different gain rates and income tax rates don’t apply to corporations, so the tax rates are different.

And, what’s interesting is we’re making this video in 2018, we just got a whole bunch of new tax law changes that have changed this whole dynamic. In the past, both individuals and corporations had gradated tax rates. Well, these new tax law changes, the only corporation tax rate is 21%. It’s a flat 21% whereas individuals has gradated tax rates still. So, what happens is, the one thing you got to look at from these perspectives is a couple of things.

The thing I want to focus on today is primarily just the different taxing structure. So, C corporations are such that, again, they pay a flat 21% tax and there’s no capital gains taxes, and so if you got a business type that you might have some appreciating property or things that you can sell with capital gain type income, which is income where you buy into an investment or hold something that appreciates in value, you sell it at a later date, it’s not an ordinary or an operating part of your business.

Well, individuals have capital gain rates, so the top individual rate, from an income tax perspective, is a little bit different then from a corporation perseverative, so you can have a 15% or 20% capital gain rate, and then you have the gradated ordinary income rates that we got to deal with.

So, we’ll take this now and we’ll talk through and actually look at an example. So, you might be saying, “All right. I got a corporation over here with a flat 21% tax rate.” So, if that’s the case, but I’ve got graduated rates up in the high 30s for individual taxes, why would I want to be a C corporation? Well, maybe you do want to be a C corporation, but we got to talk through some other things, that I got to share with you, that might surprise you.

If I got a business, let’s say I made $100,000, and let’s call this ordinary income and we’ll talk about capital gain versus ordinary income and different tax rates, what have you. It’s called all ordinary income, so we’re playing with the same types of incoming with both entities. So, I have this 100k in income on both entities. I’ve talked about, in previous videos, the need to have reasonable wages in S corporation. I mean you have to pay yourself some type of wage. Similarly with a C corporation, you’re going to want to pay yourself a wage also because as we come down here to the bottom, you’re going to find out something about double taxation of a C corporation and maybe that’s something you heard before and we’re going to get into that.

Say for example, then, we pay ourself $25,000 in wages in both of these entities because wages are deductible in both corporations and then we a W2 and we pick that up on our personal return as income. Those are ways to get income out of a corporation entity. There’s other ways too, but we’re going to get into all those today. So, we have wages here that are to me.

Then, I’ve got another $25,000 in operating expenses and they’re similar for both, whether it’s rent or payroll for other employees or what have you. So, that leaves us $50,000 in profit. Well, this $50,000 here is going to go out to my individual return via schedule K1, which is a schedule that’s generated inside an S-Corp return,. It’s going to go out into my personal return. I’m going to pay tax on that. $50,000 plus my $25,000 in wages and whatever my tax bracket may be. That’s going to be dictated by my marital status, kids, a number of other sources of income, what have you, but we’re keeping it simple here.

Well, one thing that’s neat in S corporations is I can take this $50,000 out as, what they call, distributions to myself and it’s not taxed because I’m going to pay tax in that 50k anyway. If I want to take distributions of this 50k out, that’s been profits in the C corporations, I’m going to be taxed again because this is going to be what’s called a taxable dividend, so that’s the catch here.

And, a dividend tax rate, it’s going to be what they call a qualified dividend, is going to be somewhere around 15%, so you can see that if, say for example, over here, I have an effective tax rate of 15% to 20% on the personal return and I’ve got a 20% here and 15% here, you’re really not any better off being a C corporation. In fact, you can find, in certain instances, you know you’re paying more tax with this double taxation structure.

Now, I will say C corporations do have their place and again, it comes back to the types of owners that are going to be part of the C corporation, the number of owners you’re going to have, and one of the things that we like to look at at Davis CPA group, in particular, is the most tax efficient structure we can come up with. So, I’ve got some clients that currently are C corporations. We pay tax at the 21% bracket because they keep income and they keep profits inside that corporation and don’t need to take them all out.

If that’s the case, maybe I’m more tax efficient to do that and we’re not going to change it just for the sake of change. This is something to think about whenever you’re looking at a corporation structure, to be able to look at and make sure you run the numbers fully to figure out what’s the better answer for you.”